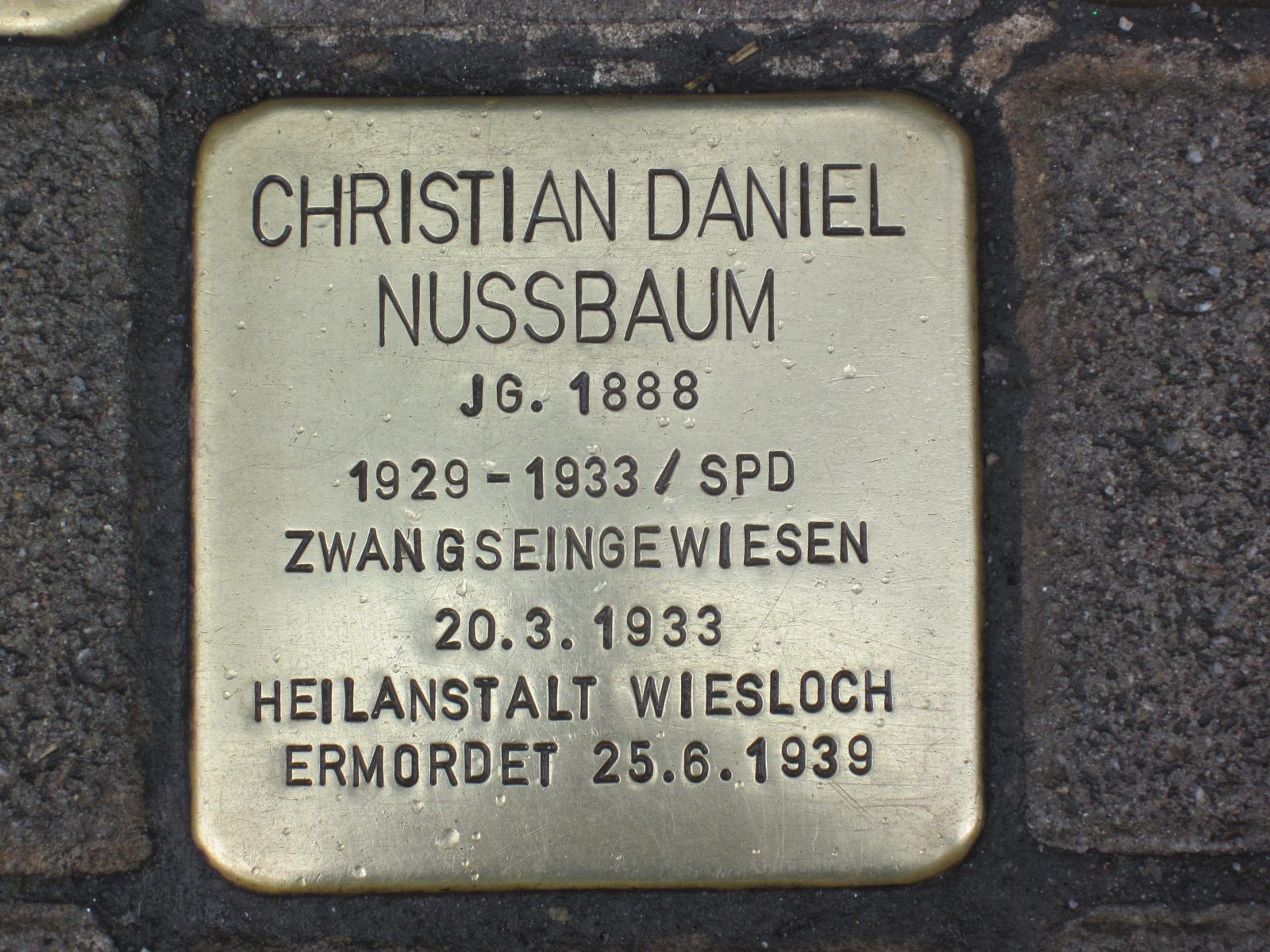 Christian Daniel Nussbaum was born in Strasbourg on 9th July in 1888. According to his own statements, he did not have the Jewish religion. He came to Freiburg in 1927 and lived in the Wiehre at Sternwaldstraße 1. However, he lived the longest in Freiburg from 8th September in 1927 to 20th June in 1932 at Landsknechtstraße 9, where a Stolperstein was also laid for him. During the laying of the stone, a resident said: „He never lived here, he only lived in Barbarastraße.

Christian Daniel Nussbaum was a director and member of the state parliament for the Social Democratic Party (SPD). He was married to Emma Nussbaum, née Eberle, who was born on 10th May in 1894. She had the Jewish religion.

One day before his arrest – intended by the Freiburg Gestapo – on 16th March in 1933, an article about Christian Daniel Nussbaum was published in the Nazi newspaper in Freiburg, the Alemannen, in which he was portrayed as an impostor. Title: „A fine representative of the people“.

On 17th March in 1933, the police wanted to arrest him at 4 o’clock in the morning at Barbarastraße 1. In the process, he shot two of the officers who were to arrest him. Their names were Weber and Schelshorn, the National Socialists renamed – after their death – Barbarastraße into Schelshorn-Weber-Straße. The Freiburger Tagespost reported briefly on the same day, 17th March, about Nussbaum’s „bloody deed“ and arrest at 4.15 a.m.. The article also stated that he had suffered a stroke a year earlier and had been in a psychiatric clinic, that he was not a Jew, as was often assumed, and that his house had been searched for forbidden material. This justified the preliminary condemnation: Nussbaum was mentally ill, a habitual drinker, he moved in communist circles, rioted when he drank alcohol, etc. In addition, the morning of the crime was described in some detail:

„Nussbaum had already said ten days ago that he had a revolver and ten shots, that he would not let himself be arrested. (…) But a resident of the house opened the front door for the police. Then a locksmith opened the flat door. All the rooms except the bedroom were empty (it was about 4 o’clock in the morning). There the key was stuck inside, so the locksmith could not help. Together the three policemen then forced the bedroom door. That’s when Nussbaum fired. He reloaded and shot again. One policeman, Schelshorn, was dead, another, Weber, was seriously injured. [He also died later, M.) finally Nussbaum surrendered. He had shouted if it was the blue police. She shouted burglar. She pretends she thought they were thieves. He then came out with his hands up. The father-in-law Eberle, who was also in the flat (i.e. in an attic belonging to the flat, Müller-Hill), and Nussbaum’s wife were taken into protective custody for accessory to murder.“

A short time later, the until then respected SPD member of the state parliament has already become in public opinion a Marxist criminal who is said to have perjured himself and committed embezzlement, and his act is „the un-spirit of organised Marxist sub-humanity“. 40,000 to 50,000 people are said to have been at the state funeral for the two dead policemen, according to Prof. Müller-Hill (Source 66, p. 8). Christian Daniel Nussbaum received the so-called Paragraph 51 of the Reich Penal Code, i.e. he could not be held responsible for the crime. But there was no real trial either. He remained in the Wiesloch asylum where he had been taken. The mayor of the time, Dr Kerber, used a mass rally on Münsterplatz to stir up public opinion against Bolshevism and in favour of Hitler. Public opinion apparently demanded retribution for the police killings, even a prelate called for it. Even fellow party members were „faced with a complete conundrum“ (ibid., p. 10). The Alemanne of 31th March in 1933 „contains a call for a boycott against Freiburg Jews, 12 lawyers, 17 doctors and many firms are mentioned with their names and addresses.“ (ibid.) The files on the NUSSBAUM trial had disappeared in Freiburg archives. Prof. Benno Müller-Hill tried to find the medical records of Christian Daniel Nussbaum with a great deal of sleuthing. He spoke to people who had known him. The most frequently expressed opinion about him: He was normal, very intelligent, an outstanding personality, a culturally interested person.

Christian Daniel Nussbaum was taken from the remand prison to the Freiburg prison after his arrest and finally to the Wiesloch prison on 20th March in 1933. There he was asked to recount his life (ibid., pp. 28ff.) and reported:

„Infant school, for 6 years, always been the best in class, scholarship to attend secondary school, 3 years to final examination, Strasbourg School of Arts and Crafts, final examination in modelling and wood sculpture, visits to museums, earned well. 1911 joins the socialist movement, two ‚uncles‘ took part in the Baden Revolution of 1849. Studied law, history of art, Renaissance, scholarship to study in Italy, got a prize every year, studied philosophical development of Kant, Hegel, Feuerbach in Berlin. Soldier in the First World War, participated in the Battle of the Somme, was buried. Romania campaign, infected with syphilis, advisor in the Reich Ministry in Berlin after the war, in the Landtag since 1929, then attack of weakness due to too much work. Hospital, banned from working as a member of the Landtag by his doctor. In the Wiesloch hospital he explained the act as an act of self-defence and did not understand why the police did not break into his flat. He said: „They could have come to me during the day, they could have told me calmly – I didn’t do anything! I still said to myself, the National Socialists can’t do anything against me, if I helped Wagner after all, that he wasn’t arrested (…) I only knew that I had resisted. The police car honked in front of the house, I said: ‚Thank God, now the police are coming‘.“ (ibid., p. 37).

Because of various threatening letters, Christian Daniel Nussbaum had then had a gun licence issued. He was firmly convinced that the people who broke into his flat at 4 a.m. were politically motivated criminals. His personality was then psychiatrically assessed, everything he had said was used against him. He wrote to his wife, to lawyers, hoping for help – in vain. The 60-page report diagnosed him with ‚Progressive Paralysis‘ and „described the forty-five year old NUSSBAUM as being of unsound mind when he committed his crime.“ (ibid., p. 47) The experts qualified him in inhuman language: „inveterate socialist, restlessness and loquacity, flight of ideas, weakness of thought, weakness of judgement, megalomania, over-friendly, pompous, uncritical, etc.“. According to the expert report, he is said to have said: „Papen is a swine, an idiot (…) Hitler is an idiot (…). Long live the German Social Democratic Republic.“

The doctors of the Wiesloch asylum did everything to present Christian Daniel Nussbaum’s act as that of a brain-damaged person. Not a word was said in his defence that he had actually been threatened. Because breaking into his flat at night – especially in this politically threatening situation – represented such a decisive encroachment on his personal rights and those of his wife that the act of self-defence was perfectly understandable. NUSSBAUM: „I could not have acted otherwise at the moment, I had to act this way – I had to defend myself.“ (ibid., p. 51f.) Christian Daniel Nussbaum’s act was seen by those in power as a political action, citing ‚popular sentiment‘ which now expected appropriate atonement. Seizures, which Christian Daniel Nussbaum suffered from – probably also due to his syphilis, which was treated too late – increased. He suffered from headaches and back pain and feared he would have to stay in Wiesloch.

Through recent research in Wiesloch, a student of Prof. Müller-Hill found out that Christian Daniel Nussbaum was murdered by medication in the Wiesloch asylum on 25th June in 1939, not even 51 years old.