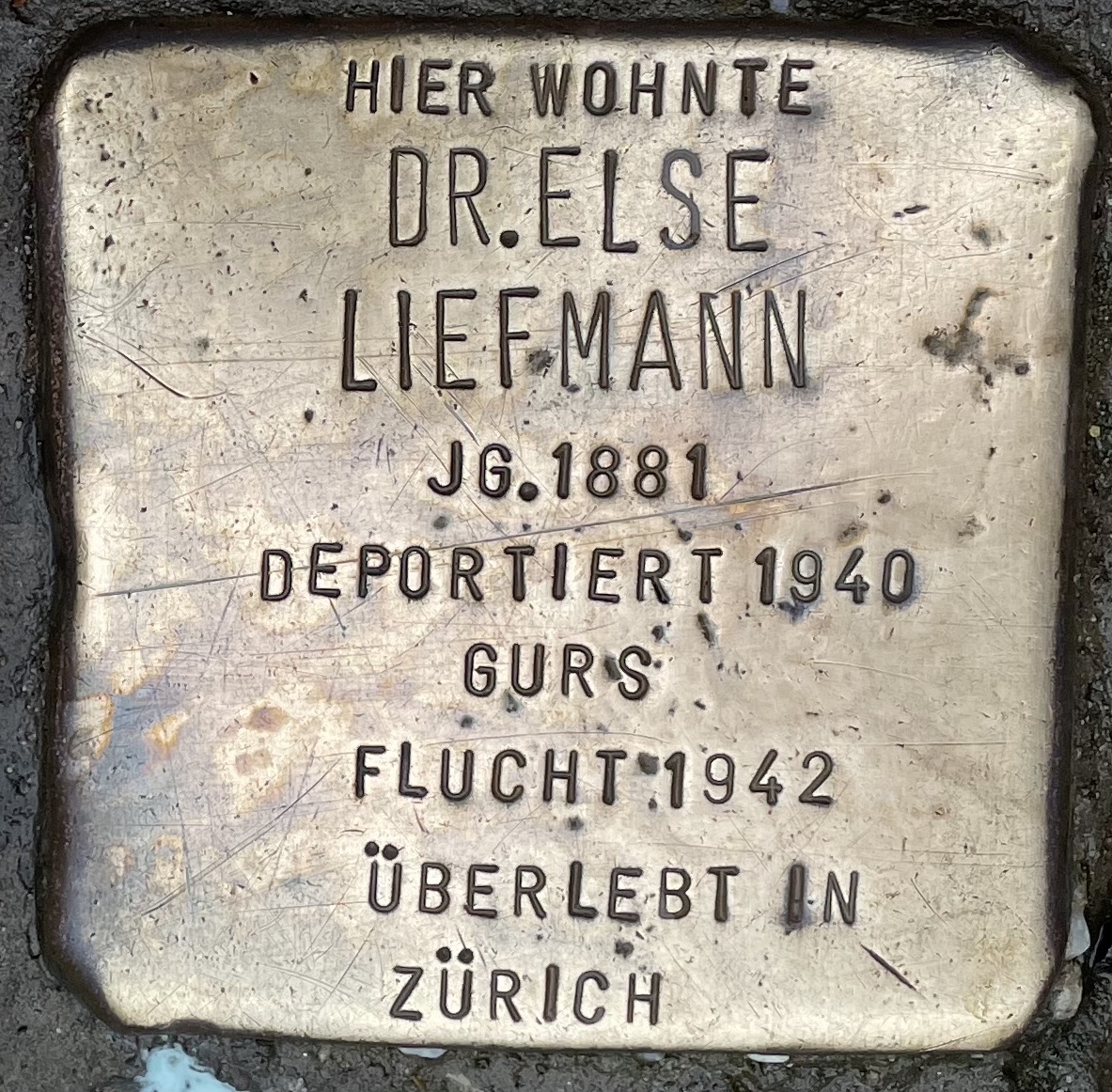 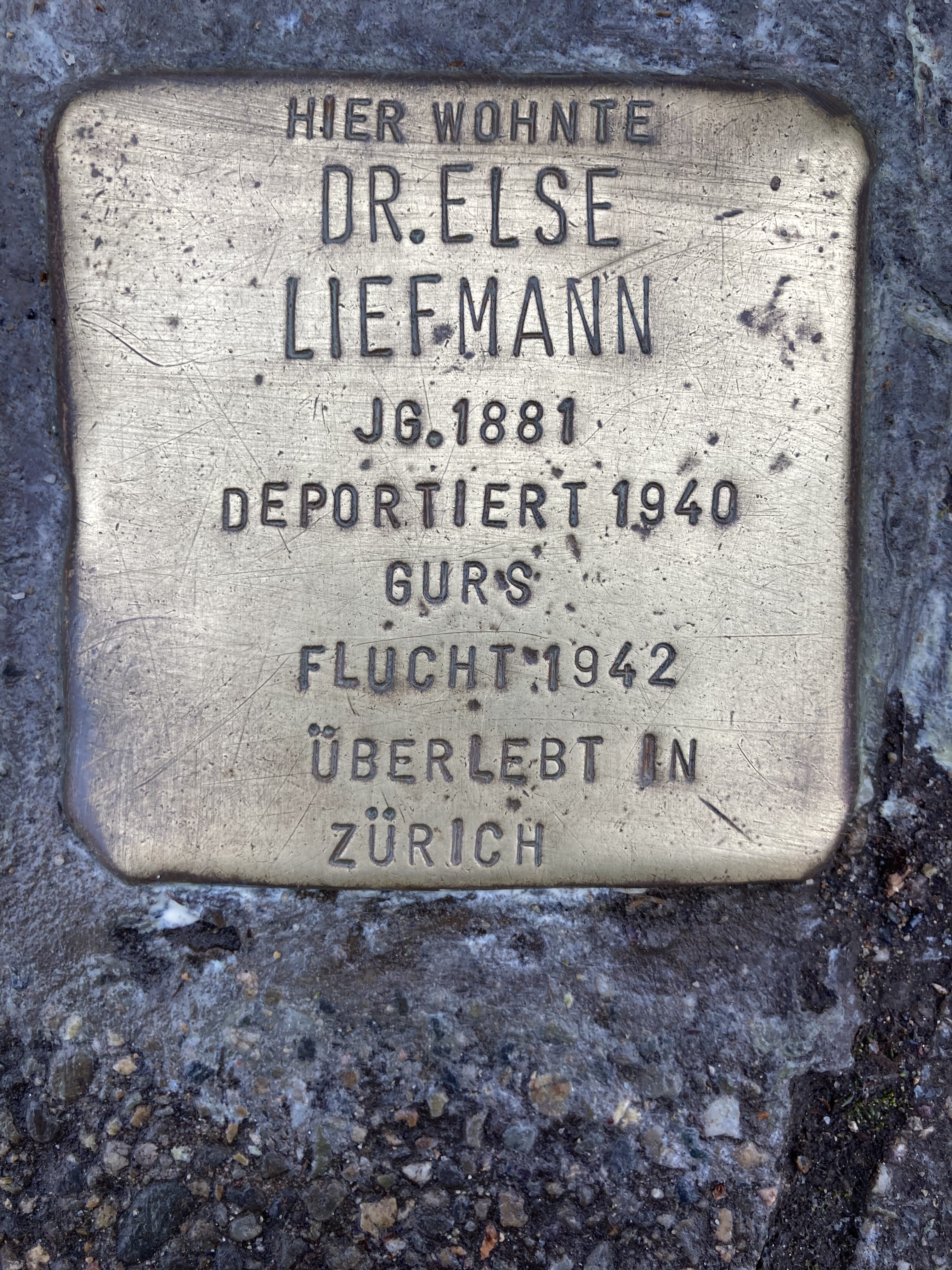 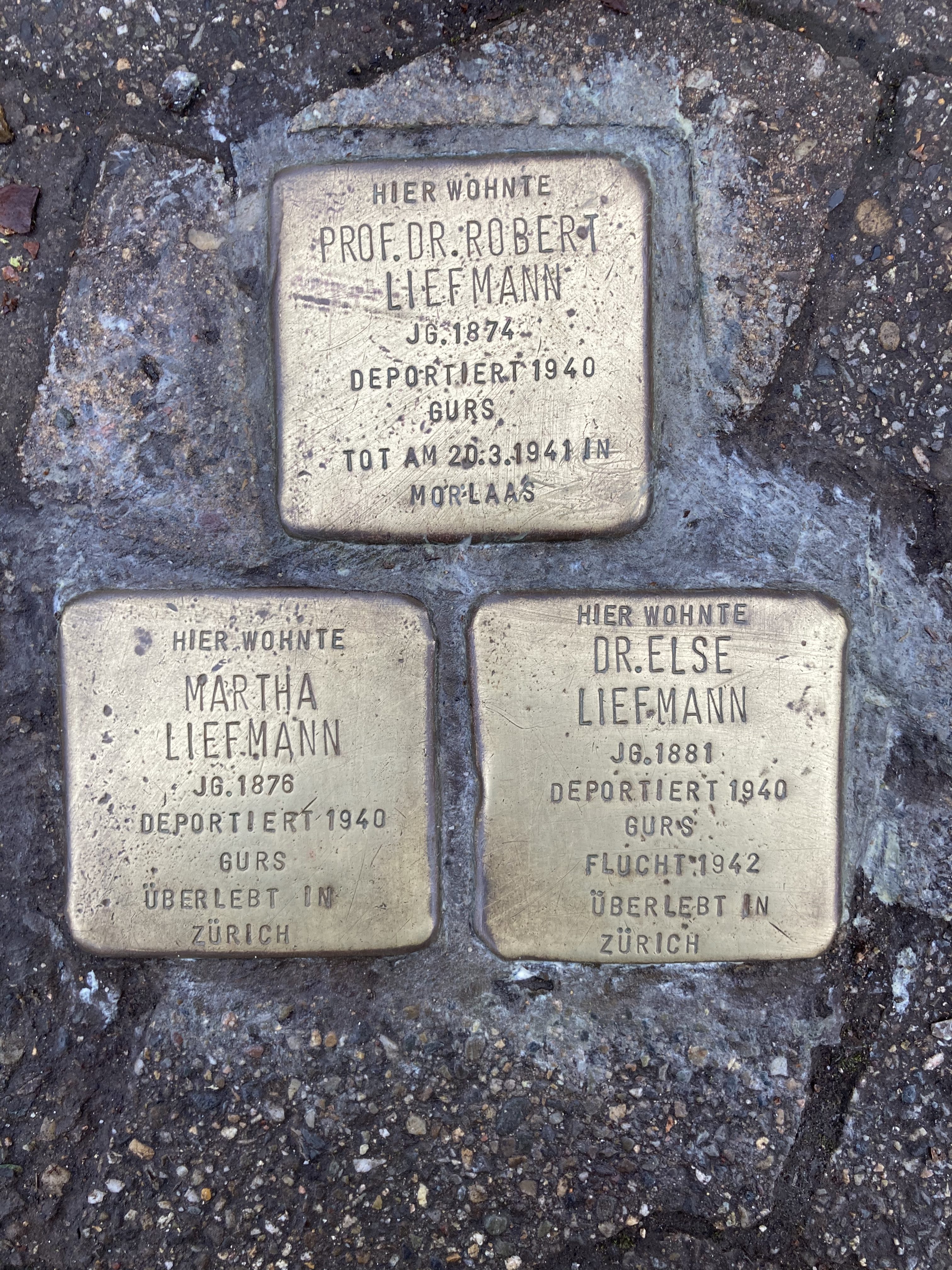 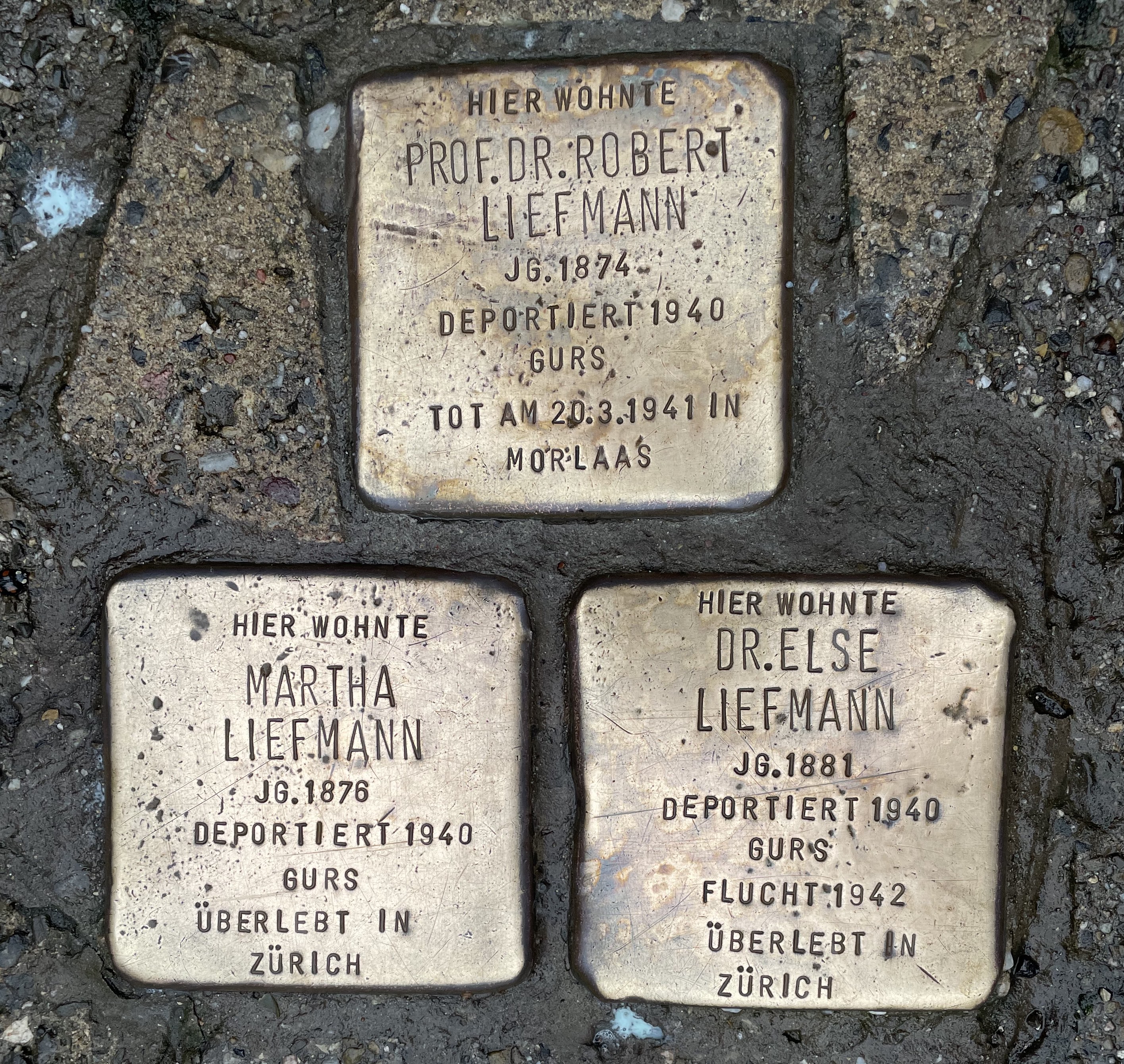 The pediatrician DR. ELSE LIEFMANN was born on May 25, 1881. She lived with her siblings PROFESSOR DR. ROBERT LIEFMANN and MARTHA LIEFMANN at 33 Goethestraße in Freiburg. In 1885 her parents, merchant Semmy Liefmann and Auguste Juliane Liefmann, moved with their five children from Hamburg to Freiburg, so that the house in Goethestraße was home to the family until October 1940. After the early death of her siblings Karl Alfred (*1875) and Harry (*1877) and the death of their parents, the unmarried children ROBERT, MARTHA and ELSE took over the LIEFMANN property. Like all the children of the family, ELSE LIEFMANN enjoyed a good school education. After graduating from high school, she not only completed her medical studies with a doctorate, but also her studies in education. In 1915 she settled in Freiburg as a pediatrician, but was also pedagogically active as a teacher of health education at the girls‘ school. From 1919 to 1922 she was a councilwoman of the German Democratic Party in the Freiburg City Council. Committed to social policy, she proposed the establishment of mobile soup kitchens for the starving population in 1923, the year of inflation.

Until 1933, the LIEFMANNs, as an academically educated, politically committed and economically successful family, were among the most respected and integrated citizens of Freiburg. Then they too were hit by the anti-Jewish measures of the National Socialists. Although her parents had left the Jewish community and had their children baptized as Protestants, they were nevertheless excluded from their professions and the university: ELSE LIEFMANN lost her medical license and her teaching position at the girls‘ school in 1933, and ROBERT LIEFMANN was banned from teaching and was forcibly demerited.

However, the LIEFMANNs did not consider emigrating because of their close ties to Freiburg. A Gestapo official had assured them in 1939 that nothing would happen to them. Nevertheless, the three siblings were arrested on October 22, 1940 and deported to Gurs. Their property was confiscated, their possessions sold, and their house expropriated by the German Reich.

About the situation on the deportation train they stated: „For us personally, the two-day and two-night journey went relatively well ( … ) The escorts on the train were SS men. Don’t ask me how they behaved in those last hours until they disappeared in Lyon, having vented their thieving and sadistic instincts on the defenseless“ (Source 38, p. 17). ELSE LIEFMANN immediately became active as a doctor in the sick barracks. „Our situation is terrible(…) The number of dysenteries (diarrhea/Ruhr M.M.)) is great and there is no way of disinfecting them. In ROBERT’s district there is typhus,“ ELSE LIEFMANN described the situation in a letter dated 18.11.1940 (Source 50, p. 31 ). In numerous letters, she gave thought to relief actions and provided information on the whereabouts of wanted persons and those in need of help

Through the mediation of the refugee secretary of the Ecumenical Council in Geneva, Adolf Freudenberg (a relative), it was finally possible in February 1941 to grant a leave of absence for the LIEFMANNs. ELSE LIEFMANN was able to leave the camp on March 7, 1941, followed a week later by MARTHA and ROBERT LIEFMANN to nearby Morlaas. ROBERT LIEFMANN died there on March 20, 1941, probably from blood poisoning. Even in Morlaas, the siblings were not safe from the grasp of the National Socialists, so they continued their efforts to emigrate to Switzerland. On April 8, 1941, MARTHA LIEFMANN received an official entry permit to Switzerland and left Morlaas for Geneva on April 25, 1941; ELSE LIEFMANN remained behind alone. Her situation there became increasingly threatening due to anti-Semitic incidents in Morlaas and the tightening of regulations concerning leaves of absence from the Gurs camp. „They had the impression that they were being played with. Age and illness had no meaning. Families, married couples were torn apart. ( … ) The misfortune around me hit me like a nightmare“ she writes (Source 38, p. 82). Finally, she received permission to relocate to another department and moved to Dieulefit on December 16, 1941.

From there, ELSE LIEFMANN managed to illegally enter Switzerland in September 1942 with the help of escape helpers over the mountains of Savoy. It was a dangerous escape, but she was apparently unaware of the danger. ELSE LIEFMANN stayed in Switzerland with her sister MARTHA. They renounced the re-acquisition of German citizenship. MARTHA LIEFMANN died in Zurich in 1952. ELSE LIEFMANN received Swiss citizenship in 1956.

Their book Helle Lichter auf dunklem Grund (Bright Lights on a Dark Ground) was published in 1966, in which the siblings describe the memories they took with them from the years 1940 to 1942 into the rest of their lives. „So I want to talk more about selflessness and charity than about malice and meanness, although they are not concealed. I want to show how, in the most unlikely person, that spirit was alive which was first invoked in the third book of Deuteronomy 19:18: „Love thy neighbor as thyself.“ Such experiences were unforgettable for us, my brothers and sisters and me,“ writes ELSE LIEFMANN in the introduction of the book (Source 38, p. 39) which she dedicated to the Swiss and German youth. DR. ELSE LIEFMANN died in Zurich on May 24, 1970, at the age of 89.

A monument of a special kind and of charity was set to the sisters MARTHA and ELSE LIEFMANN by the then thirteen-year-old girl Laure Schindler, who was imprisoned in Gurs and later rescued, in her book Der unmögliche Abschied (Source 51). She writes:
„I, for one, benefited greatly from their exceptional behavior. Not only did they enable me to survive in good physical health, but they also, in a way, saved this little girl’s soul by spending time with me and teaching me to appreciate, above all, the beauty of the surrounding mountains and the impressive sunsets – a sight that no one could take away from us behind our barbed wire fences. The more our relationship deepened, the more I learned from them as well: among other things, they explained to me that there were no fences or boundaries for either the beauty of nature or the human spirit. On the one hand, they made my daily life in the camp easier, as my mother (…) would have done; on the other hand, they strengthened my mental balance, which my father, in his weakened condition, was no longer able to do. ( … ) Elsie and Martha established a kind of parallel world for me, in which the child that I was did not have to do without anything and practically no longer had to suffer from the lack of a real family. By taking, as far as possible, the place in my life of parents who protected their children, they also managed to make me laugh again and to save me from the worst: loneliness. ( … )

Fifty-five years ago, Martha and Elsie entered my memory as members of my family who were wiped out by the Shoah. ( … ) 55 years later I found out by chance that they too had survived the Holocaust. ( … )

They both loved me, and they tried ceaselessly to comfort me. So we had our very own mountain in particular. (…) Its impressive beauty, how majestically it lay there, especially at sunset, gave me the necessary strength as well as a feeling of stability, unshakability and inner peace, so that for a moment I could completely forget the place where I was forced to live. I also think that my passion for the mountains comes from that place where I was locked behind barbed wire, my skinny body covered with lice, and often terribly afraid. Martha and Elsie helped me not to lose the ground under my feet. It wasn’t until 55 years later that I also learned their family name, Liefmann. Otherwise, they were simply Martha and Elsie for me, my guardian angels“ (Source 51, p. 97ff.).