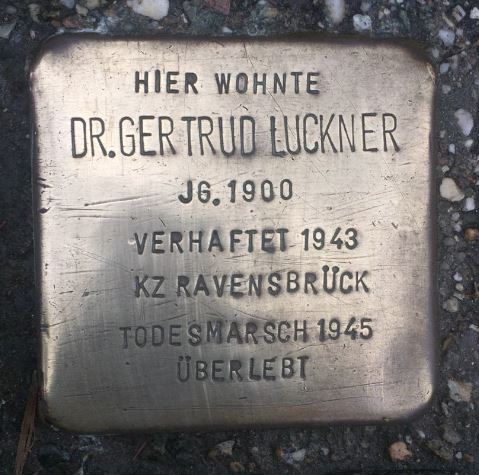 DR. GERTRUD LUCKNER was born Jane Hartmann on September 26, 1900, in Liverpool. Her biological parents were Gertrude and Robert Hartmann. Her foster parents, Karl and Luise Luckner, took care of little Jane and adopted her in 1922. Due to relocations, illnesses (including tuberculosis) and the war of 1914-18, she did not attend school regularly and was not able to graduate from high school until she was 25 years old. She went through various internships in the social sector. She then studied economics in Königsberg, Frankfurt and Birmingham. She graduated with a degree in economics in the summer of 1929. In 1931, GERTRUD LUCKNER moved to Freiburg. She received her doctorate there, but also studied at the Institute for Caritas Sciences.

As Dr. Hans-Josef Wollasch writes in his book about GERTRUD LUCKNER, she recognized „as a critical reader of Adolf Hitler’s programmatic pamphlet Mein Kampf, and as a careful observer of his speech appearances and of the SA’s public image“ (Source 71, p. 19) that this new movement was inhuman and hostile to Jews as early as in 1931. GERTRUD LUCKNER was a pacifist. She met Sister Placida (EVA LAUBHARDT ) before her conversion to the Catholic faith.

DR.GERTRUD LUCKNER was active in many ways during the Nazi terror throughout Germany, as she supported and rescued Jewish people. Her correspondence was monitored as early as 1933/1934. DR. GERTRUD LUCKNER found new ways to help rescue Jewish people across the German-Swiss border. During a lecture about her, Dr. Hans-Josef Wollasch showed sketches of escape routes via Singen am Hohentwiel, which DR. GERTRUD LUCKNER probably used or passed on. Several former Freiburg residents, among them e.g. the Lais family, told that GERTRUD LUCKNER had visited Jewish families by bicycle after the Reich Pogrom Night in November 1938 and offered her help. She provided help time and again in many ways, often with the support of the Archbishop of Freiburg. She personally built up networks – without unnecessarily endangering the lives of those who knew her. She proceeded very skillfully and traveled mostly at night.

Else Pripis (born Geismar), a survivor from the concentration camp Theresienstadt, recounted that GERTRUD LUCKNER had sent parcels with food to her brother Alfred Geismar from Emmendingen to his Berlin address several times. She said that her brother could not have survived without this help. Else Pripis-Geismar visited GERTRUD LUCKNER after the Nazi terror, as a way to thank her for her support. Actually, the two wanted to have dinner together, but – as Else Pripis tells – GERTRUD LUCKNER was so upset when she heard about the fate of her brother, who took his own life at the age of 17, that they did not go out.

– Betrayal by her colleague Rappenecker of the Caritas Association

– Arrest on March 24, 1943, police prisons in Wuppertal, Düsseldorf and Berlin

-After eight months of imprisonment, she was deported to the Ravensbrück women’s concentration camp on November 5, 1943 She was given prisoner number 24648 and the so-called „red triangle“ for political prisoners. She was supported in the concentration camp by the nun EVA LAUBHARDT (Sister Placida), who was also imprisoned, and KATHARINA KATZENMAIER , later Sister Theodolinde. She also received mail and small parcels from time to time. After two years of terrible concentration camp imprisonment, GERTRUD LUCKNER was sent from Ravensbrück on the so-called death marches at the end of April 1945.

In a conversation with Sister Theodolinde on January 2, 1990 at the St. Vinzenz nursing home in Freiburg, DR.GERTRUD LUCKNER reported :

„I see almost nothing anymore, I hear only very badly. ( … ) The concentration camp was hell. We who had to endure the worst of human sadism and cruelty day after day know that. ( … ) My nights are again tormented hours, when I cry out in my waking dreams in fear of the atrocities of the SS, who beat on me, yelling until I fatigue nervously, this time in my bed here. And all the so-called „late effects“ will accompany us until death, and will physically and mentally affect us in such a way that we will always be misunderstood everywhere among people.“
On April 28, the Ravensbrück concentration camp was supposed to be demolished by the SS camp leadership.(…) The fuse and explosive charge had already been set, and all the wooden barracks could have been quickly blown up with the prisoners. In this way, 25,000 girls, women and children were to be murdered by the SS (Source 55, p. 24 7 u. p. 250).

GERTRUD LUCKNER fortunately found, as she later said, a pair of discarded shoes. She put them on and was convinced that they probably saved her life. She survived the marches and later returned to Freiburg.

In 1951, she was invited to Israel. A tree was planted in her honor at Yad Vashem, the Holocaust Museum in Jerusalem. In 1966, she was honored as one of the „Righteous Among the Nations,“ which is the highest honor bestowed by the State of Israel. DR.GERTRUD LUCKNER died in Freiburg on August 31, 1995, almost 95 years old.