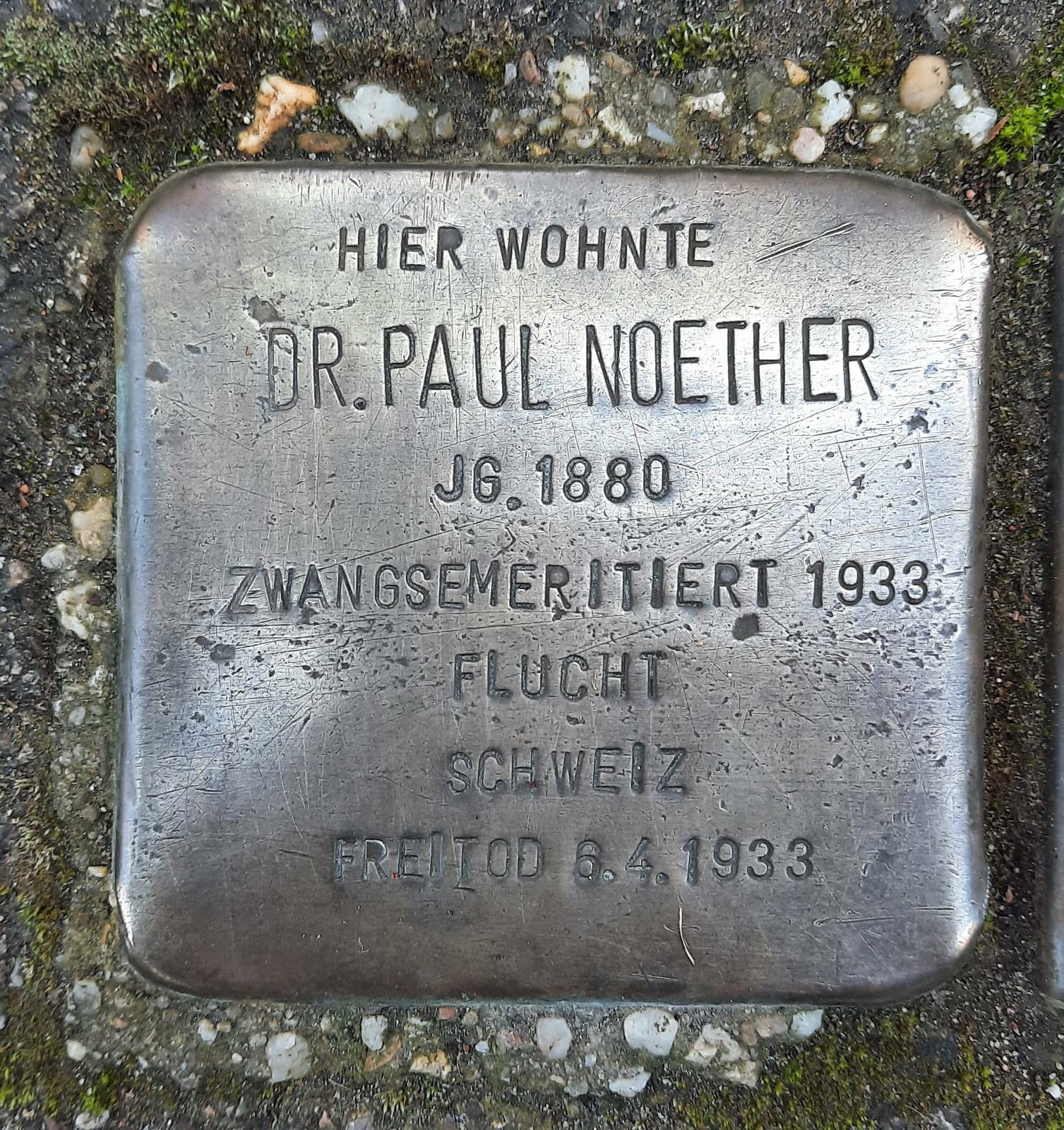 Dr. Paul Noether was born on 4th January in 1880 in Mannheim. He was married to Dr. Marie Noether, born Maas. Together they had the twins Rolf and Edith (* 13th September in 1908), who both survived the Nazi terror in England. PAUL NOETHER was a doctor of philosophy and professor at the University of Freiburg. He was related to the famous mathematician Emmy Noether. A nephew remembers him as a „sporty man“ and a „good driver“. In 1933, he was dismissed by the then rector Martin Heidegger. He was no longer allowed to enter his laboratories. This must have been a terrible insult for the successful chemist, who had developed a medicine for stomach pain that is still in use today. After all, he felt like an „assimilated German“ who had been awarded the Iron Cross in the First World War. Now he was suddenly no longer supposed to belong to this society with which he identified completely.
On 6th April in 1934, he took his own life in Switzerland. „Out of shame that he was a Jew,“ says David Blumenthal. The professor of Jewish Studies from Atlanta in the US state of Georgia is married to Ursula Blumenthal, a granddaughter of Paul Noether. Born in 1940, she never knew her grandfather. She also hardly learned anything about the family history in connection with the Nazi terror. The persecution of Jews in Germany was an absolute taboo in her family. Until today. So she reports. That is why her mother, Paul Noether’s daughter-in-law, who lives in Switzerland, is decidedly against the stumbling stone, because it makes the shamefully guarded secret public. Ursula Blumenthal, on the other hand, is grateful for the memory of and the stories about her grandfather. She and her husband were present when the stone was laid at Bürgerwehrstraße 11. On the one hand, she is happy about the new memorial stone and at the same time she is irritated that „people are now trampling on him again“.

The nephew WE. Norton (formerly Noether) from London once wrote: „When I was at the age of [illegible] I witnessed the suicide in Switzerland of Uncle Paul (Dr. Paul Noether). There my father went and after the burial he brought the ashes to Freiburg in an urn in the luggage rack above his seat. [ … ] After that, Aunt Auguste Noether … took her own life on 17th March in 1935, when I was still in Mannheim. Aunt Regina then did it in Gengenbach. Those were insane times I grew up in.“