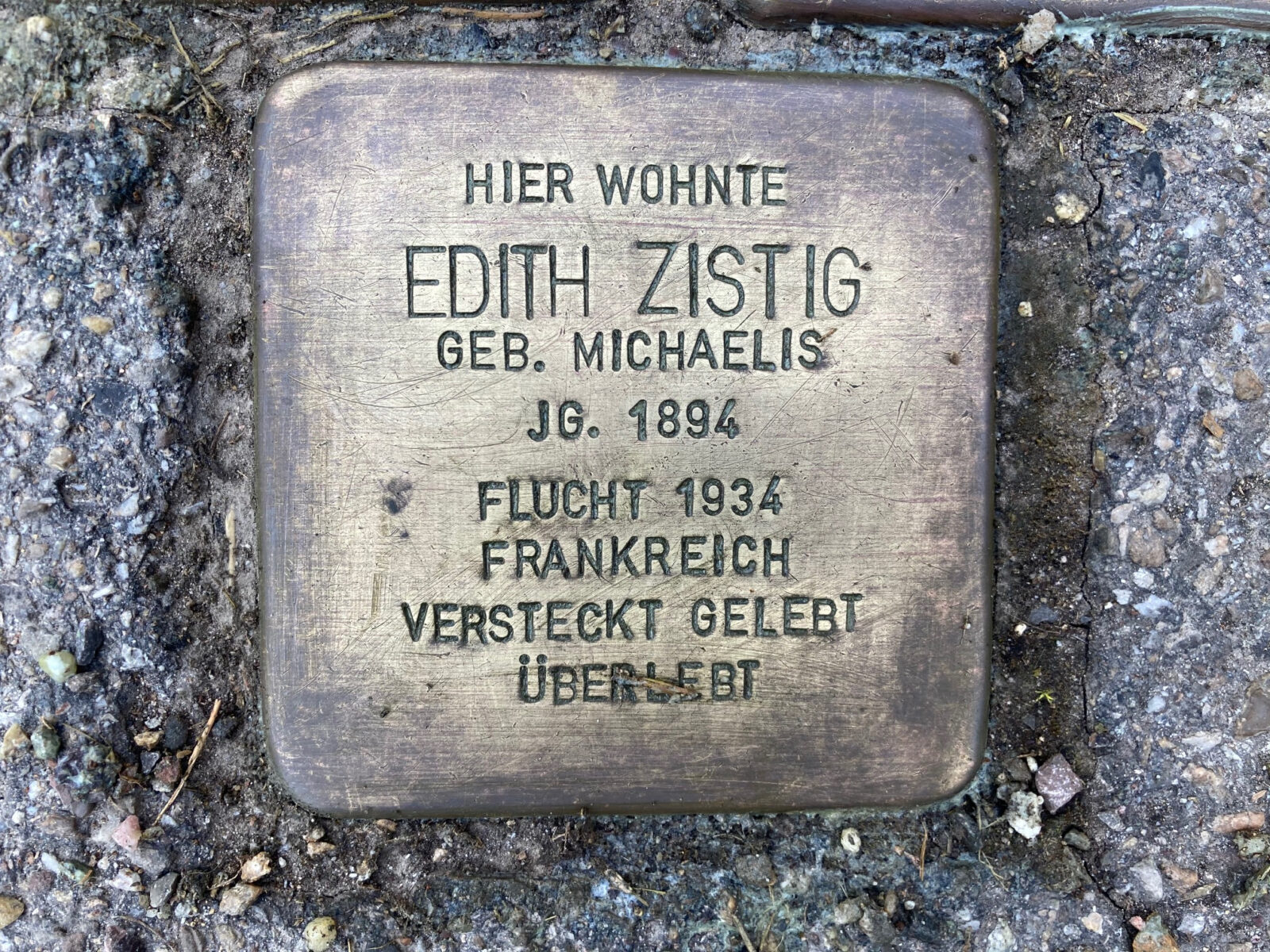 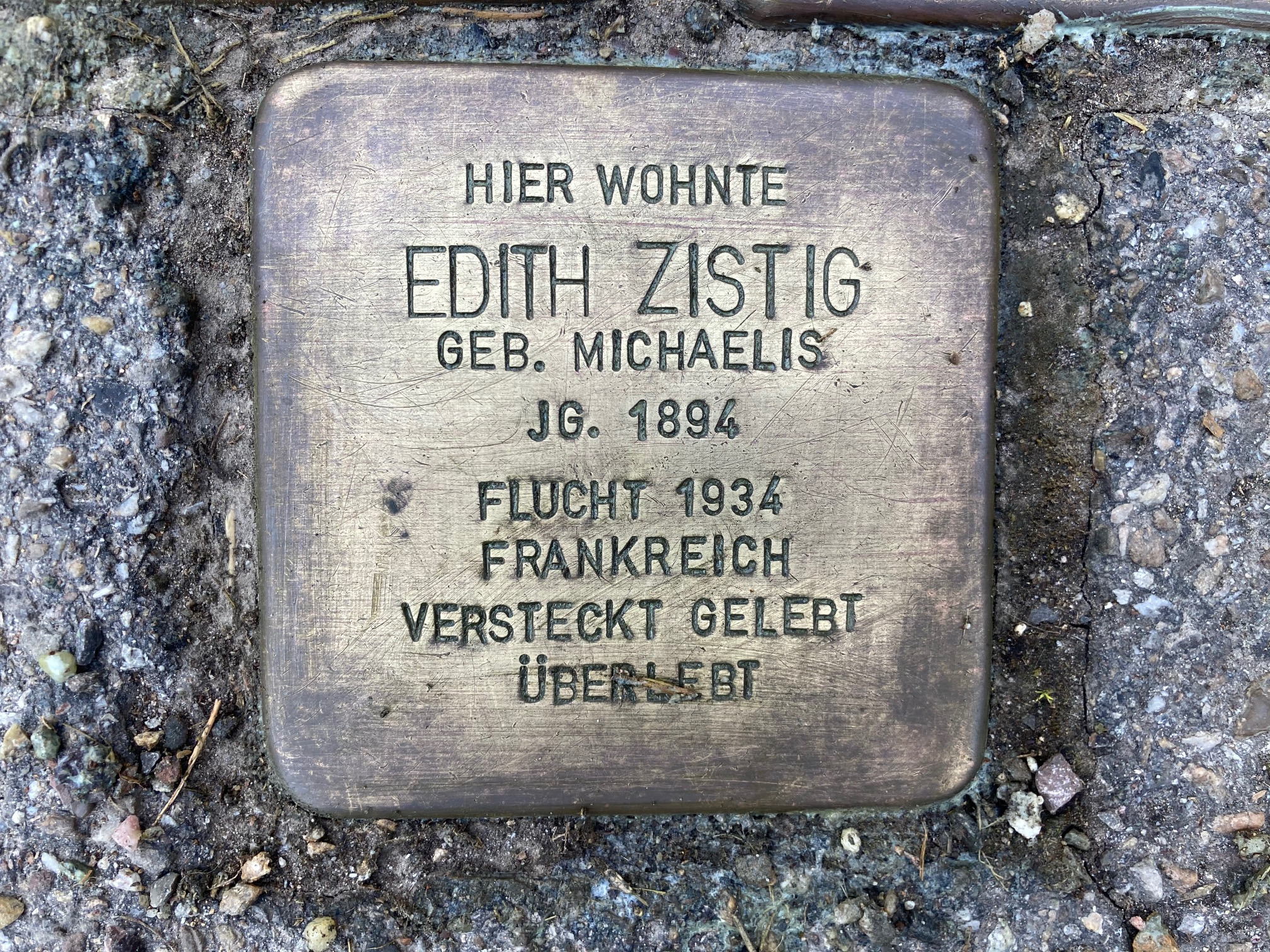 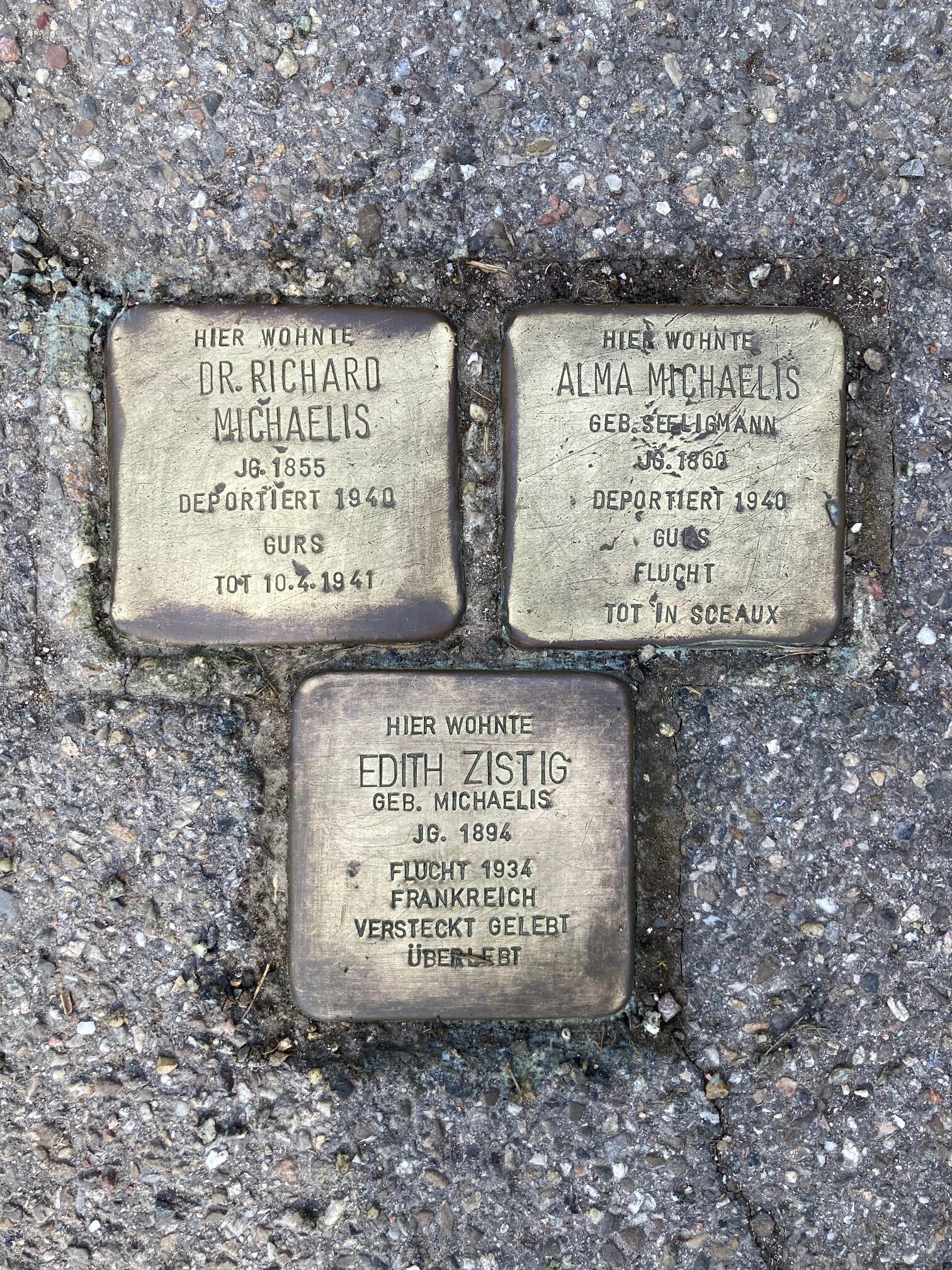 She was born EDITH MICHAELIS in Zabern (Saverne) on 21 April 1894. She was the only daughter of Dr. RICHARD MICHAELIS 202 and ALMA MICHAELIS 201 . She was a photographer by profession and married Karl Zistig from Freiburg. The childless marriage is divorced in the early 1930s.

Mainly because of the anti-Jewish sentiment and the threat of riots by the Nazis, EDITH ZISTIG first flees to Munich in 1933, where she works as a clerk in a photo shop on Leopoldstreet. EDITH ZISTIG quickly realised that living conditions for Jewish people in Bavaria had also become drastically more difficult, and she acted immediately: she fled again in February 1934, this time to Nice in France, where she took the risk of opening her own photo shop in hopes of professional success and at an extreme distance from Nazi Germany. The bold plan works out. It is not until 1943, many years later, that her young enterprise will come to an end under dramatic conditions.

The problems prepare themselves elsewhere: On 22 October 1940, her parents, who live at Wintererstreet 4 in Freiburg, are arrested and deported to the internment camp KZ-Gurs. Her father died in this terrible camp on March 10 1941. EDITH ZISTIG succeeds in freeing („liberating“) her mother ALMA MICHAELIS from this tight, life-threatening imprisonment in the same month. She then lives in the towns of Betharram (Basses-Pyrhénées) and later in Vence (Alpes-Maritimes). Both places are in the south of France. Betharran is considered a résidence surveillée and thus a less strictly supervised and less crowded camp with better overall survival conditions. Vence is then in close proximity to her own home in Nice and creates life-sustaining closeness between mother and daughter.

But the occupation of all of France by Nazi Germany’s troops in August 1943 ends the two’s brief interim on the Côte-d’Azur. In order to survive as „German Jews“, the only option left for both women is to go into hiding and become illegal. For EDITH ZISTIG, this means giving up and hastily selling her photo business in Nice, fleeing to Paris and hiding there. The mother – left to her own devices, but supported materially by her daughter (how?) – is not spared hiding in Vence in the southern French hinterland. However, with the reassuring help of kind neighbours who help the old woman survive.

Then August 1944: France is finally liberated by the Allied troops. ANNA MICHAELIS can move to her daughter in Paris. She died there in 1946 at the age of over 80. For a long time her existence was overshadowed by disenfranchisement, humiliation, loss of possessions and finally by the constant threat to her life as a Jewish-German citizen.

The next years of EDITH ZISTIG
– she lived in Paris 7e, 153, rue de Grenelle since 1948
– are marked by times of absolute neediness, then by small hopes of regaining her footing professionally. In fact, she was temporarily employed in a Parisian studio, but the great dream of self-employment kept her waiting until well past the age of 60. Time and again, she came up against suspensive obstacles due to a lack of evidence, deceased witnesses, doubted statements, the immature state of the law or, finally, her young age. After the mid-1950s, she finally succeeded in obtaining reparation and restitution payments with legal help. These put an end to the eternal begging for survival of 2 or 3 months. In her case, it is particularly depressing how many former persecutees are doubly punished by the hesitant and defensive attitude of the German restitution authorities. By being denied an advance on their restitution, they are prevented from receiving the financial help they need to make a new start more quickly.

It was not until the 1960s that EDITH ZISTIG, in a new procedure and with a more favourable legal perspective, reached a financial settlement that took into account her own as well as her parents‘ situation in an overall solution in a humane, satisfactory way.