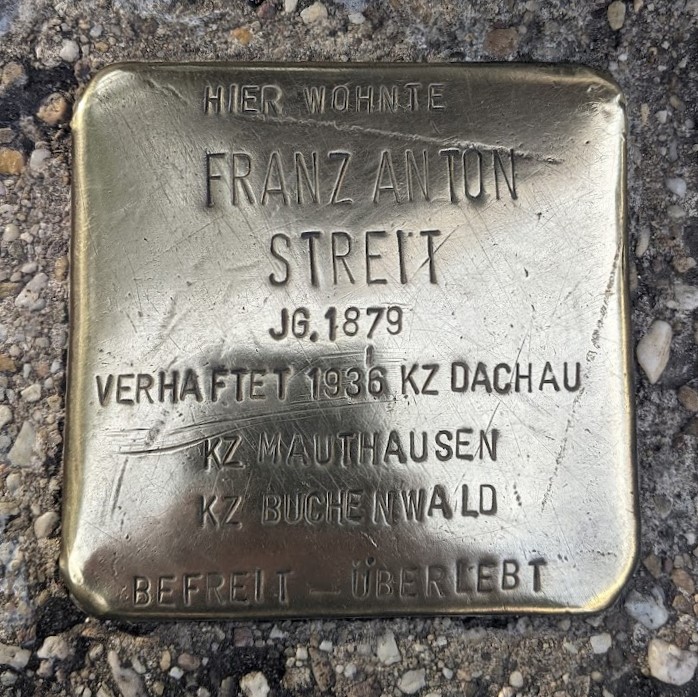 FRANZ ANTON STREIT was born on 5 January 1879. His parents were Julius and Maria Streit. His father died before the First World War, his mother in 1941. FRANZ ANTON STREIT was married three times, in his third marriage from 1930 with Johanna, née Gutjahr. His other wives had both died during the birth of their first child. The sons from these marriages were named Franz Julius (*1923) and Paul (*1928). With his wife Johanna, he had their son Hans in 1930.

At Sedanstraße 12 in Freiburg, FRANZ ANTON STREIT ran a grocery store with a coffee roasting shop. As he was classified as „Aryan“, he did not have to give up his business. Nevertheless, he was persecuted by the Nazis because he had been a Jehovah’s Witness since 1925. He was considered a central figure of this religious community in Freiburg. The Watchtower Society’s writings were distributed from his shop.
After the ban on Jehovah’s Witnesses on 15 May 1933, he hid the now also banned literature there. In addition, he did not submit to the National Socialist rules in his shop. FRANZ ANTON STREIT, for example, did not greet with „Heil Hitler“. As a result, the apprenticeship that his eldest son Franz Julius did with him was not recognised, but customers also stayed away.

A party comrade of the NSDAP lived in the same house, who observed his activities critically and probably also reported them. When the Nazis began to massively persecute Jehovah’s Witnesses in 1936, FRANZ ANTON STREIT was one of the first to be arrested. On 31 August 1936, he was on his way back from a congress of the „Serious Bible Students“, as the Jehovah’s Witnesses still called themselves at that time, in Lucerne/Switzerland, together with Fribourg sisters and brothers in the faith. Almost all of them were arrested at the border. FRANZ ANTON STREIT sat in pre-trial detention in Freiburg for five months until he was tried in Mannheim on 1 February 1937. The court sentenced him to one year and six months in prison, his wife Johanna to five months. Surprisingly, he was given prison leave while she served her sentence so that he could continue running the business during this time.

In 1938, FRANZ ANTON STREIT was arrested again and deported to Dachau concentration camp. From there he was taken first to the Mauthausen concentration camp and then to the Buchenwald concentration camp, where he was given prisoner number 6581. In 1941 he received the news in the concentration camp that his mother Maria had died. His eldest son Franz Julius was drafted into the Reich Labour Service in October 1941 and called up for military service in March 1942. He did not want to refuse military service on grounds of conscience, as Jehovah’s Witnesses usually did, because his father had been imprisoned for years and he was afraid for him. However, since he suffered a shrapnel injury early on, he was only used in the typing pool after that and thus survived the war.

The house in Sedanstrasse was completely destroyed in the great bombing raid on Freiburg on 27 November 1944. FRANZ ANTON STREIT, however, survived the ordeals of camp imprisonment and was liberated from Buchenwald concentration camp on 11 April 1945. He died in 1962 at the age of 83. More than 45 people attended the laying of his STOLPERSTEIN in January 2005, including his granddaughter Simone Streit.