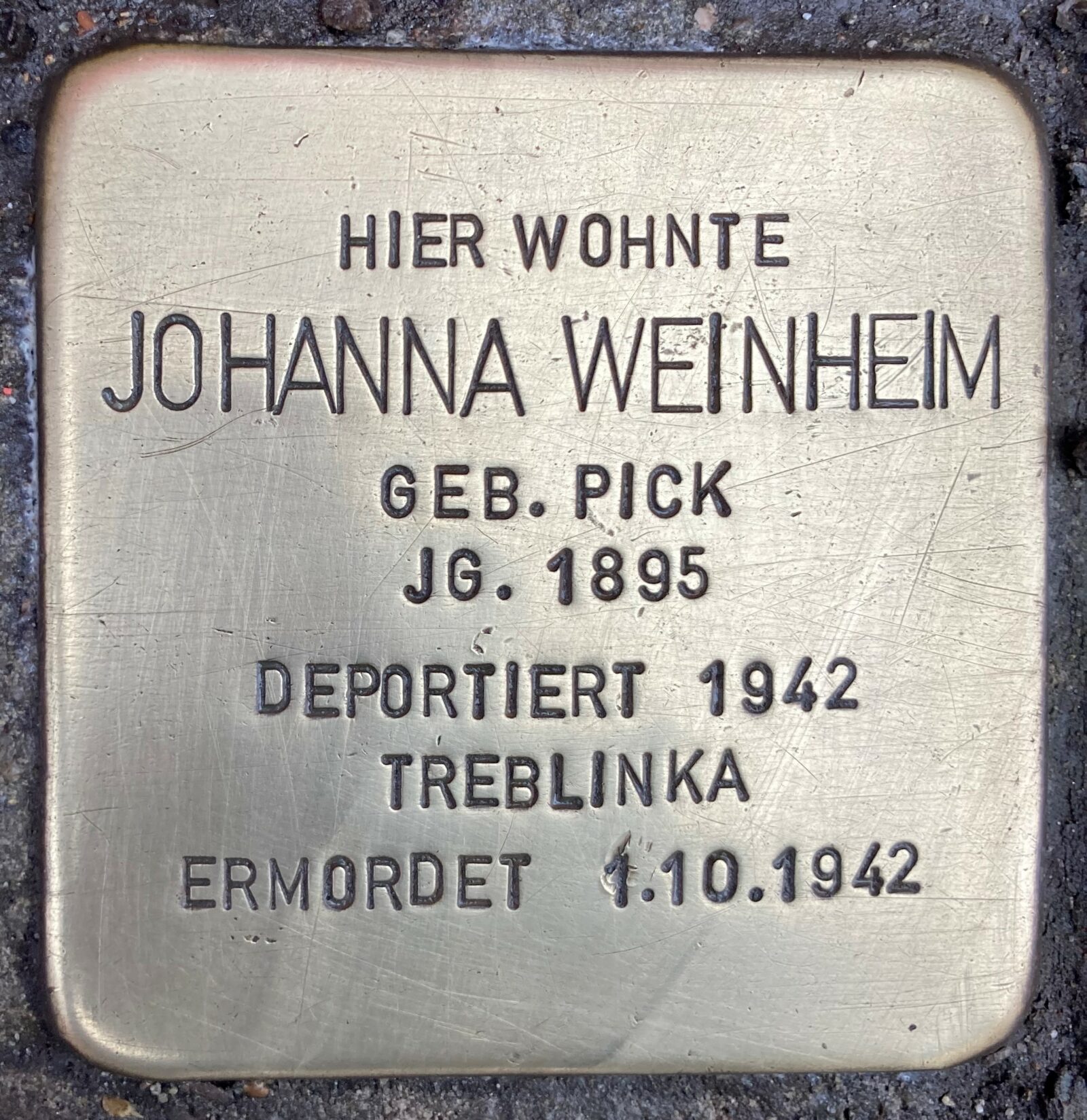 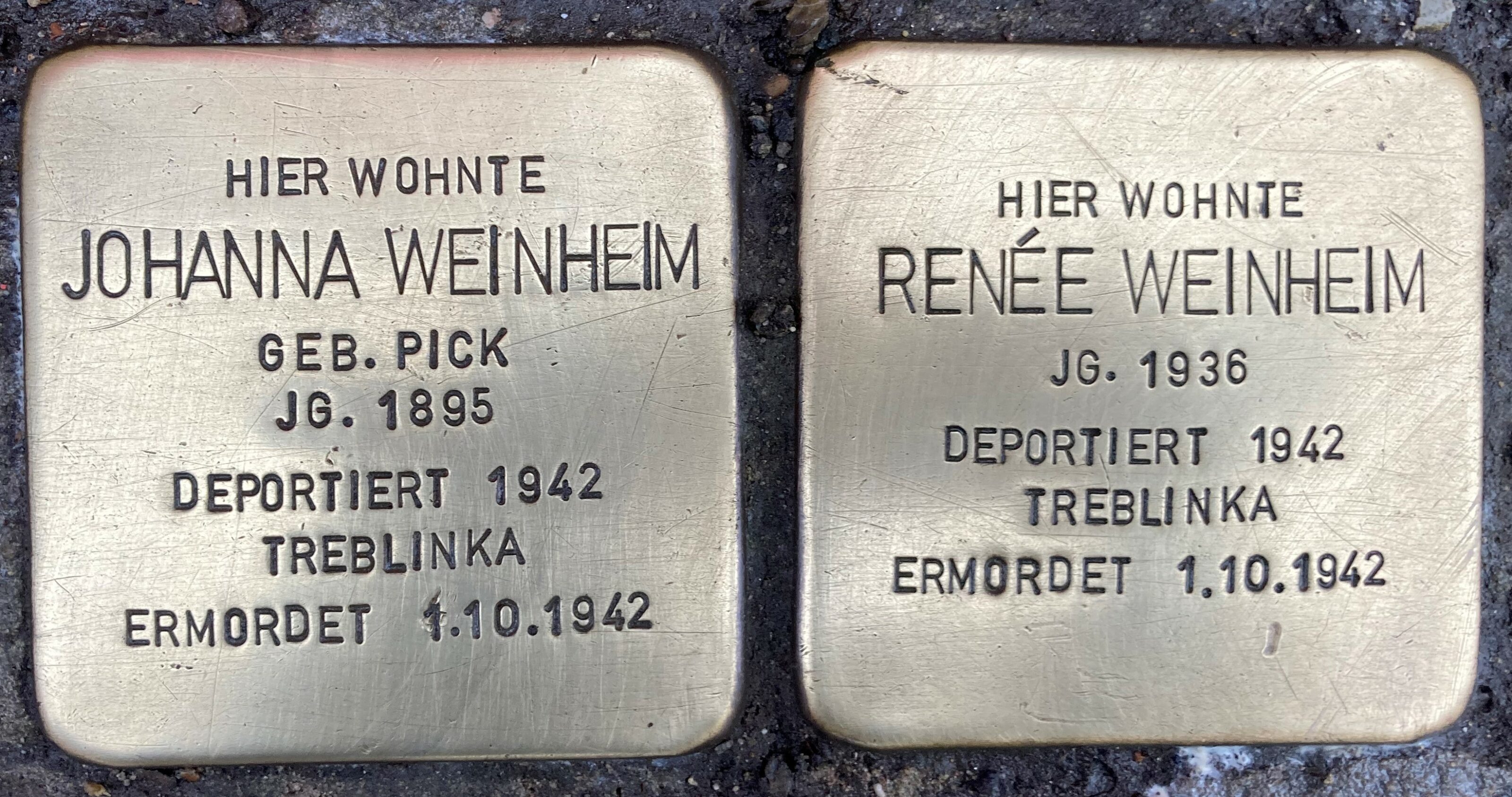 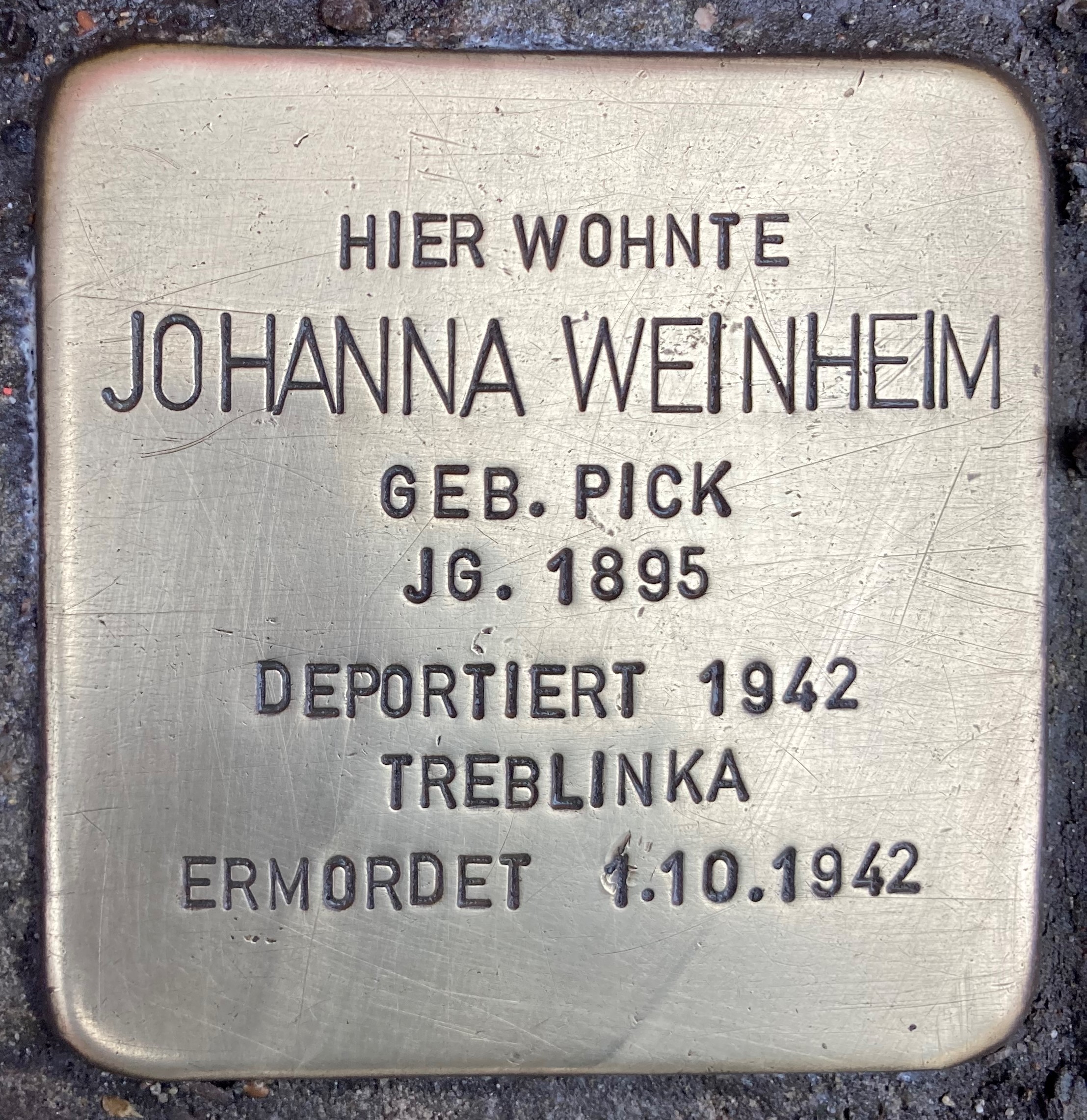 JOHANNA Pick was born in Freudenstadt on 3 November 1895 as the daughter of Richard Pick and Anna née Fleischer. Four brothers ensured an eventful childhood. Unfortunately, her marriage to the merchant Richard Weinheim did not result in any children, so the couple decided to adopt RENÉE 408 , who was born in Leipzig and was also of Jewish origin.

Both spouses ran the company Richard Weinheim, Garne und Spinnereiabfälle (yarns and spinning waste), which was later changed to Modewaren Weinheim, in an apartment building located at Talstr. 34 in Freiburg and owned by the Picks. From the beginning of the 1930s until the loss of the company after Richard’s death in 1938, a sufficient family income was provided.

The turning point came with the „Aryanisation“ of her business in 1938 after the death of her husband. After the forced sale of the company under shameful conditions and the inhuman persecution by the Nazis, JOHANNA WEINHEIM’s thoughts of escape became increasingly compelling. In the years that followed, she had been postponed twice from the deportations of Jewish Freiburg residents (to the concentration camp Gurs in 1940 and to the concentration camp Theresienstadt in 1942) for health reasons (she had taken various fever-simulating medicines). But relatives in South America could not get her a visa; and she herself did not dare to cross the Swiss border illegally with her small child and thus face an uncertain outcome. Her urgent intentions to emigrate are evidenced by a donation contract in which she bequeathed the entire household at Talstraße 34 to her cousin Ida Pick on 3 October 1941 in the event of emigration. (enclosure)

But she and her little daughter could not escape the threat of arrest. The Freiburg Tax Office 1942 on JOHANNA WEINHEIM: „Arrested on 29.9.1942 in her flat, deported on 30.9.1942 to the Generalgouvernement.“ According to the documents, JOHANNA and RENÉE WEINHEIM were first taken to Karlsruhe and on the following day, 30 September, to Darmstadt. From there, the large convoy of over 900 mainly Hessian Jewish victims was led to an undetermined destination on the same day. Mother and daughter WEINHEIM were among them: „The two Jewish women Weinheim are listed in the list of Jews deported to the Generalgouvernement on 30.9.42 under No. 44 and 45, which was communicated by my order of 4.11.1942.“ (Chief Finance President Baden, Karlsruhe on 24.9.1944).

The destination of this murder transport remains uncertain. The transport listed under the train number DA 84 may have gone to the Lublin district, but more likely to the Warsaw district with the concentration camp Treblinka – unfortunately, final certainties are not yet available.

After their arrival, mother and daughter were probably murdered immediately in the gas chambers. After the war, they were officially declared dead on 31 October 1942.

Link: the donation contract 3.10.1941 with her cousin in the original, State Archives Freiburg see above.