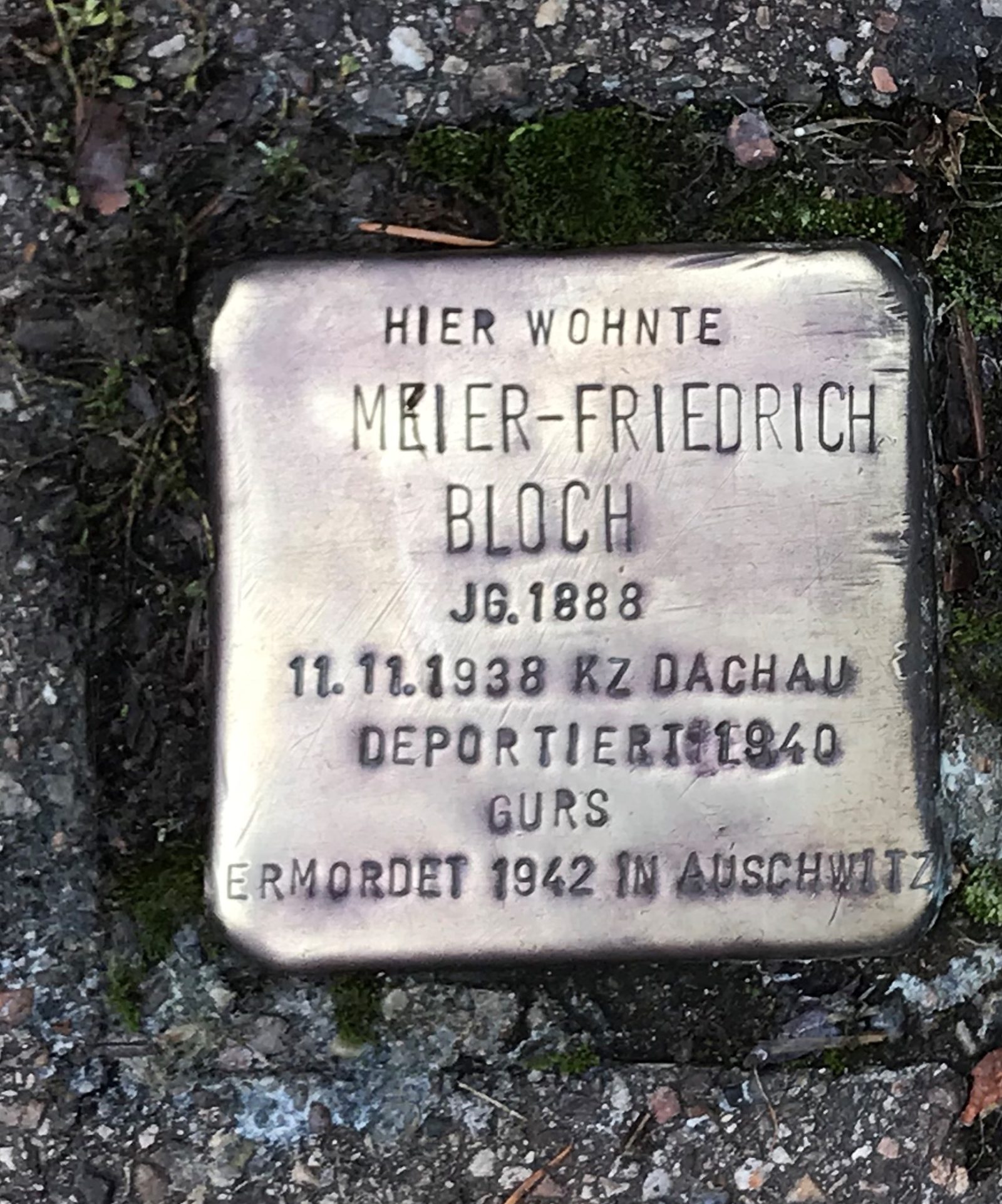 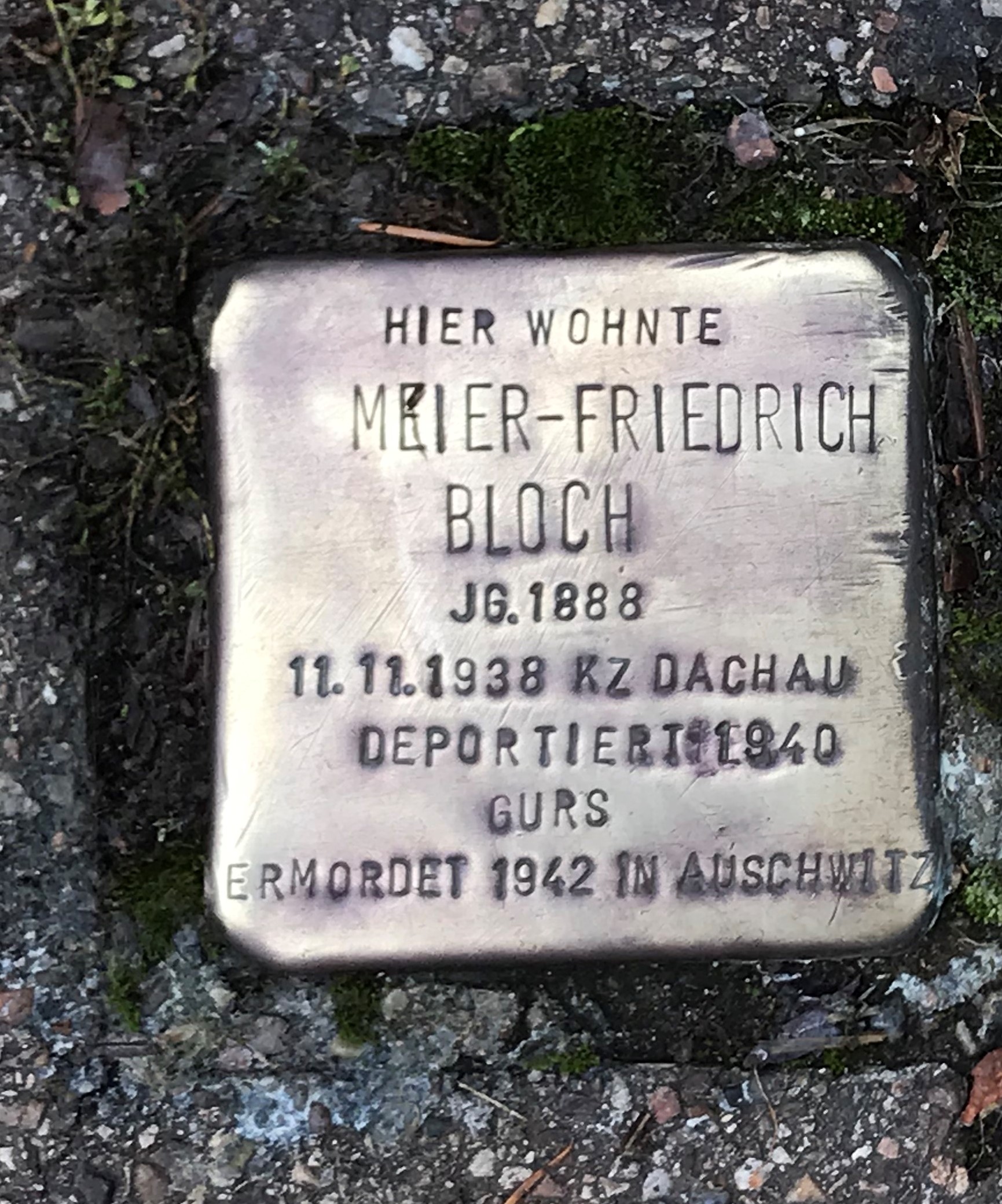 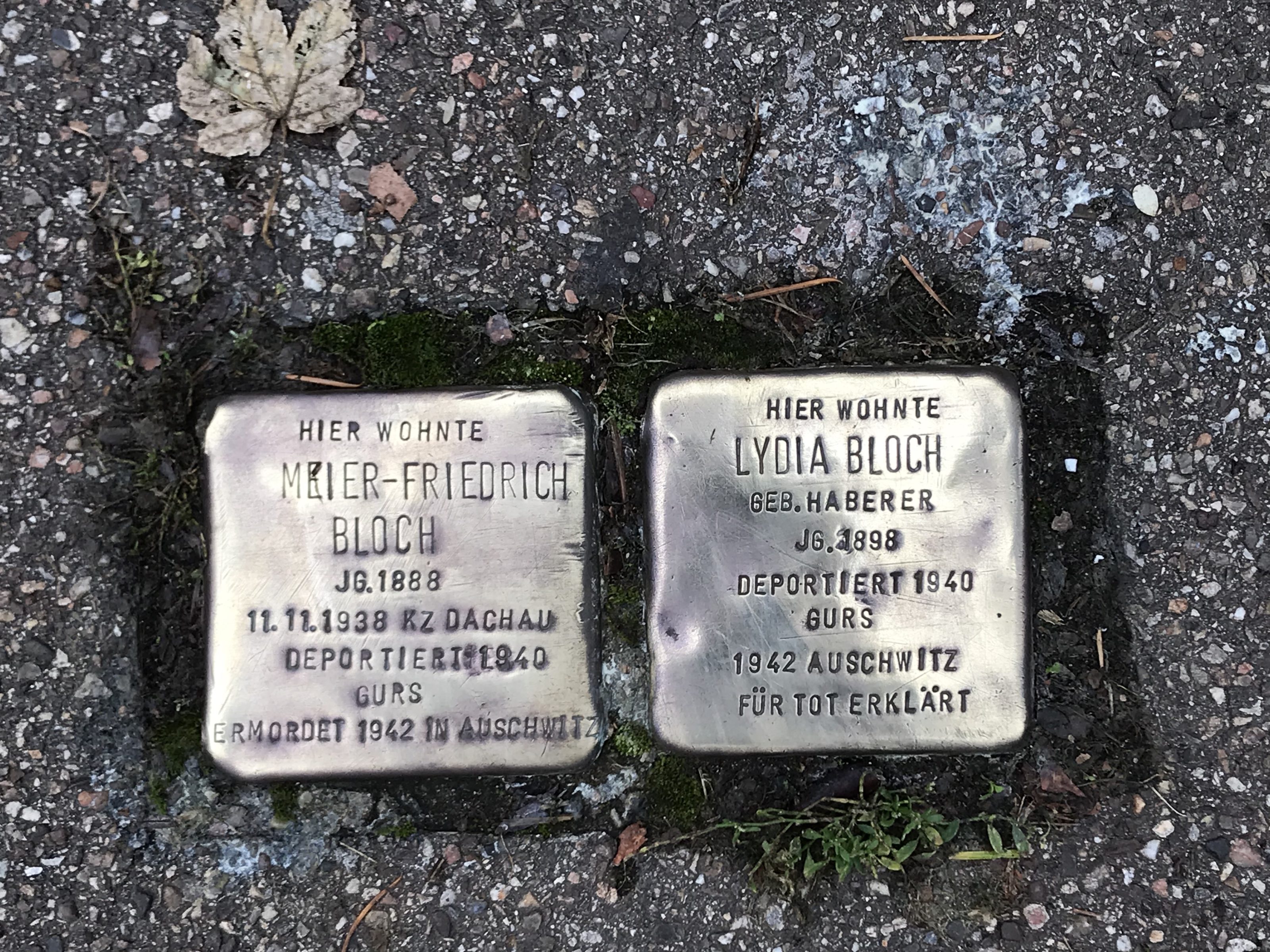 MEIER FRIEDRICH BLOCH was born in Ihringen on September 5, 1888. He learned the baker’s trade and ran a bakery in Freiburg at Breisacher Strasse 15 (today: Colmarer Strasse 8), where he also lived with his wife LYDIA BLOCH and daughter Gertrude from 1933 to 1935. After that, the family moved to Eschholzstraße 84, where their niece Renate Haberer-Krauss also lived with them during the week from 1936 to 1938, because children with Jewish religion were already not allowed to go to public schools. Her family lived in the USA after the Nazi terror. The bakery had to be sold to „Aryans“ under Nazi rule. On November 11, 1938, MEIER FRIEDRICH BLOCH was arrested and deported to the Dachau concentration camp. At the time of his arrest he is said to have had 9.69 Reichsmark with him. He was given prisoner number 20981 in the concentration camp. After his return, he had to hand over all his assets. On October 22, 1940, he was arrested again and deported, this time to the Gurs camp on the northern edge of the Pyrenees. Via the Drancy concentration camp, he was further deported on convoy No.19 to the Auschwitz concentration camp on August 14, 1942, where he was murdered at the age of 54.

Renate (she later also called herself Renee) Haberer-Krauss reports in a letter about her uncle Friedrich:

„He was a six-foot-tall, handsome, stately man with the most beautiful white hair imaginable. He studied medicine in Freiburg before World War I, then went off to war as a volunteer, was buried, and was never the same. He became a baker and the beautiful big bakery Bloch was located on Breisacher Straße. The bakery went all the way around the house. My uncle was kindness personified. Because of the spillage, he walked a little slowly. He had the patience of an angel and loved children (especially his Trudel and me). Every day he did my chores with me and taught me to read the newspaper. If I was bad and if I didn’t finish my plate, I had to go to bed. But my uncle Friedrich always sneaked into my room with a small piece of chocolate to give me a kiss and say „good night“. He was very religious, but had understanding of everything and was open. In the camp (Gurs) he visited the old men and read to them. He spoke a wonderful German and could recite the „Lorelei“, the „Erlkönig“ and „Nach Frankreich ritten zwei Kavaliere“ etc. like no one else.“ (Source 78)

About the marriage of Lydia Bloch and Meier Friedrich Bloch, the niece said that they had a loving marriage and „got along very, very well.“ Renate (Renee) Haberer-Krauss added in an e-mail dated September 9, 2005:

„In 1933, relatives of my uncle from Colmar, Paris and New York tried to get the Blochs to emigrate. Lydia and Friedrich Bloch submitted the applications and they were given a number, they sat with the consul, ready to sign. They looked at each other and said, as if from one mouth, „We’re staying home.“ Friedrich Bloch was in the First World War, was injured, they felt completely German and said, „No one is going to hurt us.“ The eldest son had been killed in World War I and the family had lived in Germany since 1700 as loyal citizens. The Bloch company, bakery in Ihringen, had existed since the late 1700s.