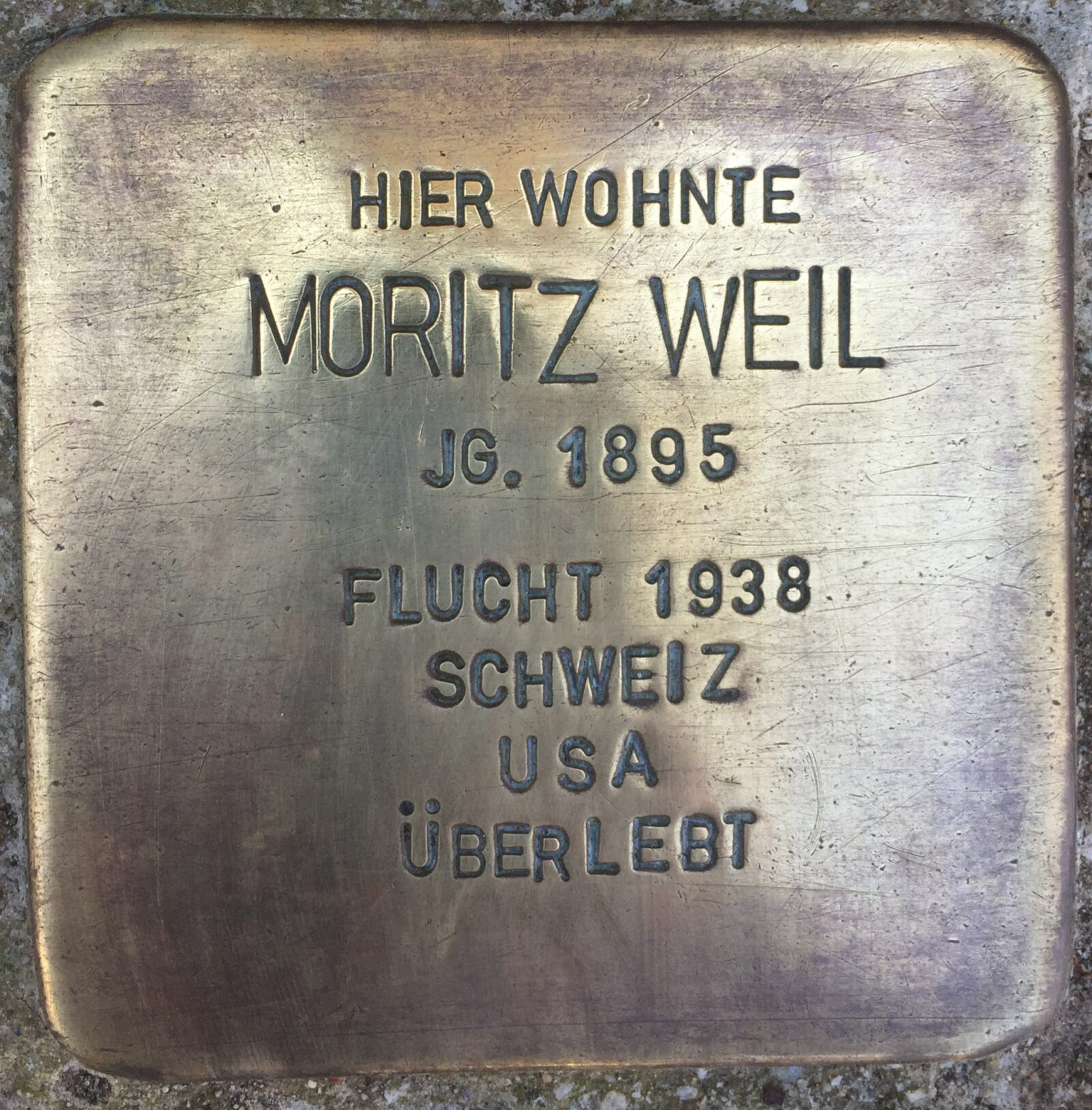 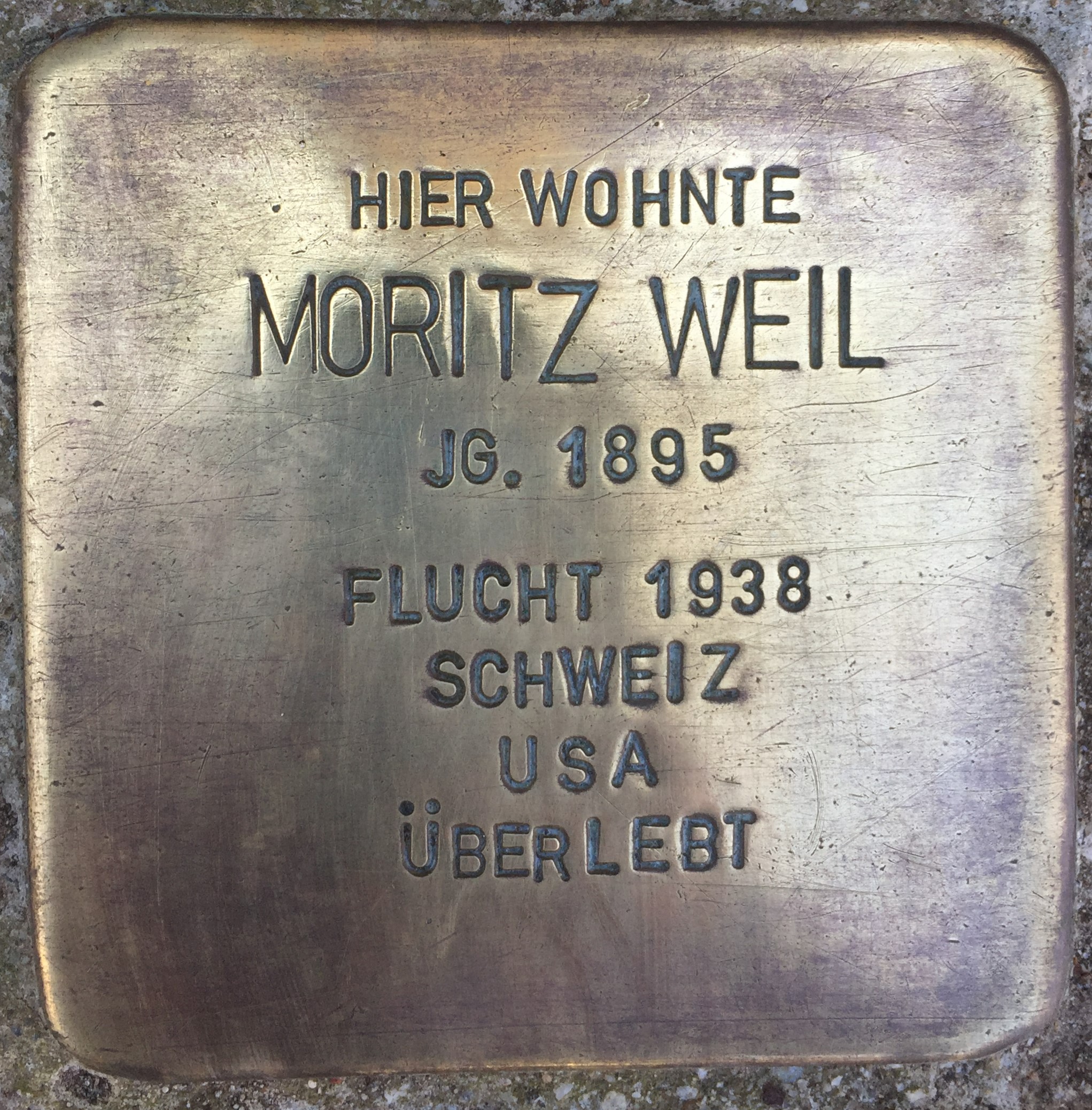 Born on 24 April 1895 in Freiburg (or Mannheim), his parents are Emanuel Weil and Ida Weil née Odenheimer. He is a merchant by profession. He is married to MARIANNE WEIL 407 née Hirschler, born on 3 August 1904 in Mannheim. The couple has two children, the twins Hans-Peter and Robert, who are born in 1927. The family lives (until 1935) in their own house at Poststr. 5.

MORITZ WEIL joins the paper wholesaler founded by his uncle Heinrich Weil in Freiburg in 1883 together with his father Emanuel as equal partners in 1922; after his father’s death he becomes the sole owner of the company at the beginning of 1933. It is an extraordinarily successful business on two footholds: On the one hand, with individual consumers, book printers, ethnographic art institutions and publishers concerning papers of the most varied design and quality; on the other hand, with aluminium works, to which special papers are supplied for further processing with the raw material. The wide range of production necessitates two warehouses: a three-storey building is located at Rosastr. 7b behind the offices, and rooms at the goods station are rented for another warehouse. In the best years, the owners of Papier Weil, Heinrich, Rosastr. 7b earn a proud income of 80,000 – 100,000 marks a year.

But in 1933, with the handover of power to the Nazis, the company’s business also begins to collapse drastically due to the rapid discrimination against the „Jewish“ population. Because of its monopoly position, the aluminium plant business can still compensate for the losses of the other branch. But the overall business decline is unstoppable and requires painful decisions:

Probably in the hope of better times, MORITZ WEIL had acquired the Freiburg house property/villa Kunigundenstr. 16 (today Prinz-Eugen-Straße 26) in 1935 for joint ownership with his wife. However, at the latest after the complete loss of both parts of the company, the decision to flee Germany probably nullified all other considerations about the business and private future in Germany.

As a consequence, the family flees to Basel from 6-8 February 1938. But Switzerland is only seen as a stepping stone for further emigration to America. Their goal is guided by the consideration of still being able to manage the enormous financial transactions connected with the WEILs‘ widespread fortune halfway successfully. A small branch of the WEIL company in Basel serves this purpose; considerable sums can still be transferred there around 1937 and thus remain spared from further confiscation and from the calculation of the levies due (JVA and RflSt). In any case, 162,000 Reichs Marks are collected by the Nazi state for these compulsory levies and made available by MORITZ WEIL.

In September 1938 the entire family leaves Basel and travels via France to Holland. With the New Amsterdam they go via New York and from there with the City of Baltimore through the Panama Canal to San Francisco, where they find a new home.
MORITZ WEIL no longer works in the USA. He and his family earn their living by renting out their own large house, which he is able to purchase in California.