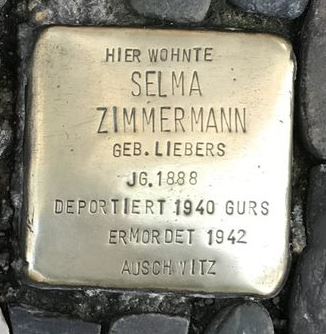 SELMA ZIMMERMANN was born Selma LIEBERS on 13 March 1888. She was the daughter of Rosa and MAXIMILIAN LIEBERS, who owned the Liebers music store at Salzstraße 11 (today Salzstraße 7). Her younger sister was called IRMA LIEBERS. The family lived above the business premises in a spacious flat in Salzstraße. Her grandfather Max Liebers had already founded the music store in 1854. At that time, Jewish citizens were not allowed to live within the city of Freiburg. Jews working there had to leave the city at night. This state of affairs had lasted for almost 300 years until the laws were liberalised in 1862 and „freedom of movement“ finally applied in Freiburg. Now people who had the Jewish religion were also allowed to live and reside in Freiburg.

SELMA ZIMMERMANN was married; we do not yet know the details. After her father, MAXIMILIAN LIEBERS, she was the last owner of the musical family business. On 1 June 1938 she was forced by the National Socialists to „sell“ the business to Karl Schropp because of her religious affiliation to Judaism. This was called „Aryanisation“.